I decided it would be easiest to start my de-cluttering with clothes as really there's only so many choices to make.


My clothes have been piling up on the bed, dressing table, chairs and floor as my wardrobe and drawers were full and going through the piles, drawers, cupboards and wardrobe in my bedroom I seem to have had a lot of clothes but nothing to wear. Sound familiar?

I made the decision to do one drawer/cupboard/pile at a time and not try and pull out everything at once.
I tried everything on even if I was sure it would/wouldn't fit.
And to make myself happy I started with my 'to slim into drawer' - I'm sure everyone (women at least) has a drawer like this in their house.

It was actually a lot of fun, helped by finding six, yes SIX pairs of trousers I can now fit into properly and wear in public :-)
It was also a bit like journeying through my past as I found outfits and items of clothing from years ago 80's and 90's that brought back lots of memories.  I'm keeping the memories and ditching the clothes :-)

I put everything that was going into big black binbags and when each one was full moved the bags out of the room and refused to look in them again as I know from experience if it sits there I'll start taking things back out and inventing a reason to keep them. 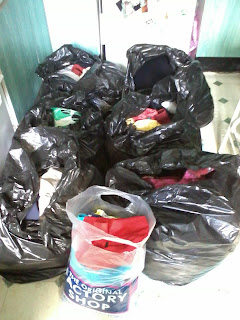 Several days and lots of clothes and dust later I won the battle of the wardrobe.

I had SIX black bin bags and one carrier bag to go to Cancer Research.

I didn't even have to worry about what was good enough to donate or not as they also get money for rags so anything they can't sell in the shops is still useful.

And they even have an option to Gift Aid it now.

My friend Hazel helped me take all the bags to the shop in one go so I wouldn't be tempted to start rummaging :-)

No more piles of clothes on the floor or surfaces, my clothes now all fit in my wardrobe and dressing table drawers.
However, I admit, I have started a new 'to slim into drawer' but its a lot smaller than the previous one.

I have way to much stuff, all types of stuff and me and my house are drowning in it.

Up till now I've done some minimal decluttering but mainly I've been trying to get organised more and find places and ways to store all the stuff I have.

The problem is now every surface, corner, cupboard, drawer, box, shelf and table are stacked high with stuff. And while I do know what it all is and where its all kept and can usually find things quite quickly when I need to,  I can't really do much with what I've got as there is no room left for actually using the stuff.

My life has becoming continually maintaining the organisation of piles of stuff. There has to be more.
I've finally come to understand Flyladys comments when she says you can't organise clutter.

So, enough is enough!

I'm starting on properly clearing out years worth of stuff and as I haven't moved home since I was 3  I have a LOT of stuff and some of it is going to have emotional attachments but quite a lot of it won't.

Some of it I've kept for fear of offending the people that gave stuff to me, ornaments I don't like, books I won't read and clothes that don't suit.

I've decided as my house is now so cluttered I never invite them round anyway how would they know if I kept their gifts or not, and would most of them even remember what they gave me.

Flylady had a little list that may help
I'll post here as I work through the various stages, and hopefully writing it down will help when it comes to some of the harder decisions of what can go and what can stay.

Anyone up for joining me or any suggestions on making it less painful, feel free to comment.
Posted by Joanne at 1:46 am 1 comment:

Joanne
Welcome to my blog. Whether you are interested in Genealogy, Stamping, Scrapbooking or Running I hope you will leave me a comment to let me know you popped by.