Where did that year go?

I didn't realise it had been as long as a year since my last update.

Spring Harvest went really well...
then it was the church AGM ...
then sorting out pulpit supply ...
then before you knew where you were it was time for the Scripture Union Summer Mission week doing childrens work every morning, team time in afternoon, youth work and family work in the evening during the week and other stuff both weekends ...
then a few days to recover at work ...
then I threw myself into helping with Butefest with storms and mud and music and friends and fun and late nights and early mornings ...
then my mum and her husband came to visit for Highland games ...

then it was late August and I broke,

It's been a long 6 months of coming to realise I can't do all that on top of 40hour weeks at work and stay sane, or in touch with friends or even family and keep my house tidy or clothes repaired or diet healthy.

I'm still learning all of these and more.

But last week I also learned how to quilt!

In amongst my bombsite of a craft room/spare room I found a pack of fabric squares I must have bought 15/20 years ago. still in their packagaing. As I'd unearthed the sewing maching recently and was trying to have some 'me time' I thought I'd give patchwork a go. 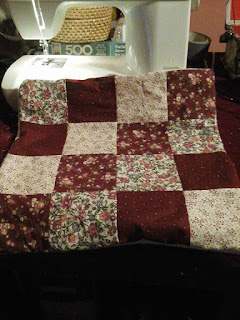 Then I found a beginning quilting series on Diary of a Quilter.com http://www.diaryofaquilter.com/beginning-quilting-series

Amy made it look really simple and not as scary as it felt. So this week I made a quilt.
I'm ridiculously happy about it.
It's not very big and it's not very thick, and the sewing is a bit wonky, but its mine and I made it and that'd good enough. 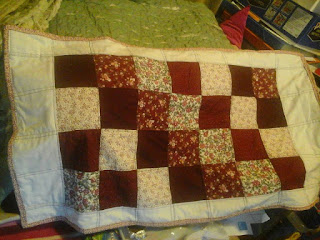 Hopefully I'll manage to update more this year but I'm not holding myself to any deadlines or framework.

Joanne
Welcome to my blog. Whether you are interested in Genealogy, Stamping, Scrapbooking or Running I hope you will leave me a comment to let me know you popped by.